February 2014 - The Daoist Roots of Qigong

Where do these wonderful practices come from and why do we practice them the way that we do? What are the basic principles that are taught through these practices? How would having more understanding/knowledge of Daoist history and philosophy affect/change what we do? How can I come to a deeper understanding/relationship/experience of my qigong practice?

By looking at the Daode Jing we can get some idea of some of the most ancient practices that have been handed down from 2500 years ago. Most people think of the Daode Jing as a philosophical text but it is actually a manual for self cultivation if read in the correct way. We will explore some of the passages that speak to self cultivation practices. We will also talk about some of the most important Daoist principles such as wu wei (not forcing), pu (the uncarved block) and the watercourse way and how these principles can be used in our qigong practice as well as in our daily lives. 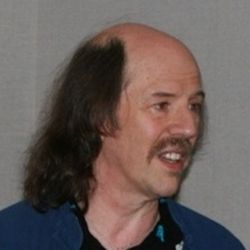 Solala Towler is a founding board member and past president of the NQA. (He ran on the Daoist platform, promising to "lead from behind" and "do nothing." Amazingly, he won and ushered in the Dolphin Dynasty!)

He has been teaching qigong and Daoist philosophy for 25 years and has been publishing The Empty Vessel: The Journal of Daoist Philosophy and Practice since 1993. He has also published 12 books, including Tales From the Tao, The Inner Chapters of Chuang Tzu, Cha Dao: The Way of Tea and the forthcoming Tao of Intimacy and Ecstasy (Sounds True, May 2014). He also leads tours to China to study Daoism and qigong in the mountains of Wudang.

In addition, he has recorded four CDs of music for use in qigong, taiji, meditation, yoga and massage (some of which have been used in various qigong DVDs, including one by the NQA.), including Mountain Gate, Boundless and Windhorse: Spirit of Tibet.