In this Qi Talk, Daoist priest Zhou Xuan Yun will be talking about the role of qigong in Daoist practice. We will begin by discussing Daoist history and philosophy. What is meant by the Dao? How has Daoism been practiced in China over the years? Xuan Yun will discuss his personal experiences growing up in a Daoist temple on Wudang Mountain. You will learn what the daily life in a Daoist temple is like, and about the years he spent “cloud traveling” as a wandering monk. We will talk about Daoist qigong and internal alchemy practices. How do Daoists think about the human body? What types of Qigong are practiced by the Daoist community in China? 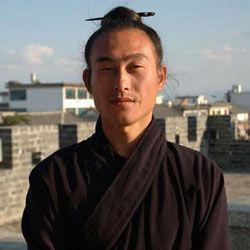 Zhou Xuan Yun, a Daoist monk who grew up in a temple on Wudang Mountain, China where he was a student, and later, instructor of Taiji and Kung Fu. He belongs to the Orthodox Unity sect of Daoism, and is trained in ritual arts, chanting, divination, and internal alchemy. At the age of 20, Xuan Yun left Wudang Mountain to live as a wandering monk and traveled alone around China for four years. Now based in the United States, Xuan Yun offers regular classes in the Boston area and travels to teach workshops on the traditional Wudang martial arts, Qigong, and Daoist philosophy. He is the author of a series of DVDs including Wudang Tai Chi, Wudang Kung Fu, Wudang Sword, and Qigong for Healthy Living.