Did you know that Quantum Physics and Taoist Qigong have discovered the same thing? They both say: "all matter is energy and it is all connected and it is our birthright to connect with it all. The primal, high frequency energy is what created and sustains the universe in all its life forms. All matter is just energy at different frequencies and energies with similar frequencies can not help but resonate with each other. So the Qigong I now teach is how to embody that primal and powerful energy so that it is constantly eliciting jaw dropping synchronicities in our lives. 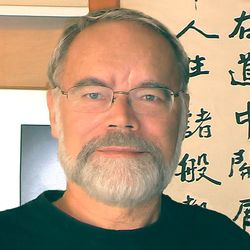 Mark Johnson is a founder of the National Qigong Association and is presently on the Board of Directors and previously served on the Advisory Council. He has 50 years experience in Tai Chi, and Qigong and has sold over 800,000 DVD's so far. He has officiated over 50 Tai Chi tournaments and has taught many famous actors in his career. Such as Frances Ford Coppola, Tom Cruise, Nicolas Cage, Ralph Macchio, Patrick Swayze, Mickey Rourke and many others. He recently authored a book titled: Life As Play (it is all about synchronicities) and he will not rest until it is in every motel room in the country.