As Chinese New Year approaches on February 12, in this month's Qi talks program Mark R. Reinhart & Lorelei Chang will be give a preview of what they will be presenting at the February mini-conference. Topics include Chinese culture on cosmology, qigong, Chinese calligraphy, as well as how dance movements tie to these themes. How nature of Dao exists in heavenly stem and earthly branches in Chinese cosmology, and how every calligraphy stroke expresses the idea of unspeakable of Dao. 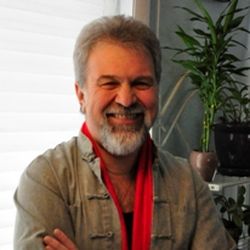 MARK R. REINHART has been a practitioner of the energetics for close to 60 years. He has extensive and ongoing training in all aspects of both Classical and Traditional Chinese Medicine including the philosophical, spiritual, metaphysical and martial traditions. Mark is a practitioner, teacher and student of numerous styles and systems of Qigong and Taijiquan. A Professional Member of the National Qigong Association (NQA) since 2006, Mark served on the Board of Directors for seven years, sat as NQA President for four years and is current serving on the Advisory Council.

LORELEI CHANG is renowned modern dance artist, Qigong teacher, and a Chinese calligrapher who has dedicated her lifetime to study these disciplines for nearly 40 years. Lorelei and her twin sister, Mai Nakanishi are world-class artists who pioneered combining Chinese calligraphy and modern dance with Qigong. They have performed internationally including in China, Japan, New Zealand, Belgium, and South Korea during the 2018 Winter Olympics. In 2012, Lorelei won a gold medal for the 24-form Taiji Quan and a silver medal for 42-form Taiji Quan during the International Wushu Competition in Connecticut. She is the founder and artistic director of DancEnlight and a board member of the National Qigong Association. Lorelei has taught at the National Qigong Association’s annual conferences, Kripalu Center for Yoga and Health and Omega Institute for Holistic Studies. She is a certified instructor of Radiant Lotus Women’s Qigong founded by Daisy Lee and studied Traditional Chinese Medicine with Lonny Jarrett. She graduated from the three-year program on Five Element meridian Shiatsu with Nini Melvin and is thrilled to have her own Shiatsu practice. dancenlight.org