During the March 11th Qi Talks and to introduce the March 13th mini-conference, Robert will speak about the subject of Jieqi Qigong based on the ancient knowledge of each year’s 24 mini seasons (a.k.a “solar terms”). Given his in-depth and long-term apprenticeship, his continued personal and professional practice of Jieqi, this is a unique opportunity to learn from a master about natural occurrences that impact us all and all of Nature. Around February 4th, even if there are two feet of snow on the ground, check to sense an up surging energy coming from the Earth that launches Spring. Around August 8th, look to see if you notice a shift in outdoor light. Robert will tell us more about the energetics of our world. 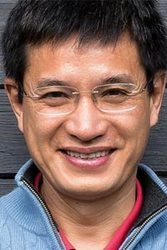 ROBERT PENG is the founder of Robert Peng Qigong and the author of The Master Key: Qigong Secrets of Wisdom, Love, and Vitality. Robert has been a regular presenter at the Omega Institute for Holistic Studies, Kripalu Center for Yoga and Health, Esalen Institute, Integrative Health Symposium, and many other organizations and schools. When eight years old, Robert began a 13-year apprenticeship with the legendary monk, Xiao Yao. As part of his training, he underwent a hundred-day water fast in a dark, underground chamber. From this experience Robert developed extraordinary spiritual powers and healing abilities.

HEDWIGE KUEPPER at the age of 85, Hedwige Kuepper decided to get out of retirement to teach Qigong. She had been a modern language teacher for 36 years on the University and High School levels.She began her first Qigong  studies in 2006 with Lamont Thomas whose enthusiasm led her to meet other teachers and Masters. She studied in Thailand with Daisy Lee and Francesco Garripoli, she also studied with Robert Peng, Ken Cohen, Luis Duarte, Solala Towler, Mark Reinhart, Michael Winn, Mington Gu and Lorelei Chang.A professional member of NQA, she holds certifications in Radiant Lotus Women’s Qigong from Radiant Lotus Qigong, Organ Cleansing Qigong from Kahuna Valley, Wudang Tai Chi from Luis Duarte and Robert Peng’s Qi Gong Healer Training. Now that she is in her 9th decade, her focus in life is to encourage other Seniors to discover the healing benefits of Qigong.